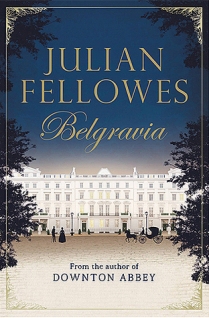 Goodreads Summary: Julian Fellowes’s Belgravia is the story of a secret. A secret that unravels behind the porticoed doors of London’s grandest postcode.
Set in the 1840s when the upper echelons of society began to rub shoulders with the emerging industrial nouveau riche, Belgravia is peopled by a rich cast of characters. But the story begins on the eve of the Battle of Waterloo in 1815.
At the Duchess of Richmond’s new legendary ball, one family’s life will change forever.
This was my Christmas Eve gift from my sister as she knew all too well that I would plan on reading during the holidays. I was excited to start another story by Julian Fellowes – particularly one advertised as a remedy for those missing Downton Abbey (that would include me).
Downton Abbey certainly sets the bar high, but Fellowes rises to the challenge. This novel packs it all in – intrigue and secrets; social status and familial expectations; upstairs/downstairs relationships. Sound familiar?
The characters in this book strive to hold up their house of cards intricately built around one secret from their past. It narrates a tale of the importance of keeping secrets for social advancement and how easily it could all come falling down.  This game of secret-keeping created such an interesting suspense, that I was hooked. I particularly loved the way it was not only what the characters were saying, but what they were not saying that propelled the plot along – it was almost a game of reading between the lines.
My only regret is that I didn’t pick this book up sooner. 4 stars!
Happy Reading!